On the 3rd of August we finally released Card Crawl Adventure on the App Store and Google play. It took us almost 3 years to develop the game and it is our biggest and most ambitious project yet. Here’s a small recap of the first month of Card Crawl Adventure.

Card Crawl Adventure started out in 2019 as a pitch by Board game designer Matthew Dunstan, who contacted me with one of his own prototypes. At the time he worked on a Dungeon Crawler themed card game that took inspiration from one of his bigger releases Monumental in which the players use a grid of 3×3 cards to take certain actions. In Monumental you only choose a row and column and activate all cards that are in your current selection. This core idea was the base of Matthews Dungeon Crawler idea and also the start of our collaboration.

Big shout out to @wisegoldfish who contacted me in Aug ’19 with his 3×3 dungeon crawler prototype, that he based on his card grid mechanic in Monumental. After many design meetings and a year of intense game design prototyping, the final design of #CardCrawlAdventure was born. 🍻 pic.twitter.com/YqpqvX169W

It took us about 1 year to create the base prototype of Card Crawl Adventure in which many aspects of Matthews prototype changed, but also many that persisted. In the end Card Crawl Adventure turned out as a mix of Card Thief’s pathing puzzle mechanic and Card Crawl’s cozy tavern based dungeon crawling with many old and new foes. The game is arguably my most complex and content heavy one yet. It took us another 2 years to create all the art, which the fabulous Max Fiedler once again contributed, all the Audio, a joint effort of Oliver Salkic and Almut Schwacke and we play tested the game for more than a year with our amazing community.

On the 3rd of August we finally hit the release button of a pretty solid „product“ with way less bugs and quirks than any of my other releases. One big takeaway here is that early play testing with a super engaged community does wonders for the game’s quality and my own motivation to throw myself at a 3 year project.

The game was in soft launch on the Canadian and Australian App Store / Google Play Store for about a year before we finally set the game to be available world wide. I already anticipated that the game would be a slow and steady process instead of a big bang like my last big release. I mostly did social media promotion (Twitter, Instagramm, Youtube, our Discord server), used my own Newsletter of about 5000 subscribers to announce the game and payed the Toucharcade Podcast for a small shout out on their weekly show. A week after the release Apple picked up the game and did a major front page featuring in both the Today and the Games Tab, which helped us a lot to get some initial attention. 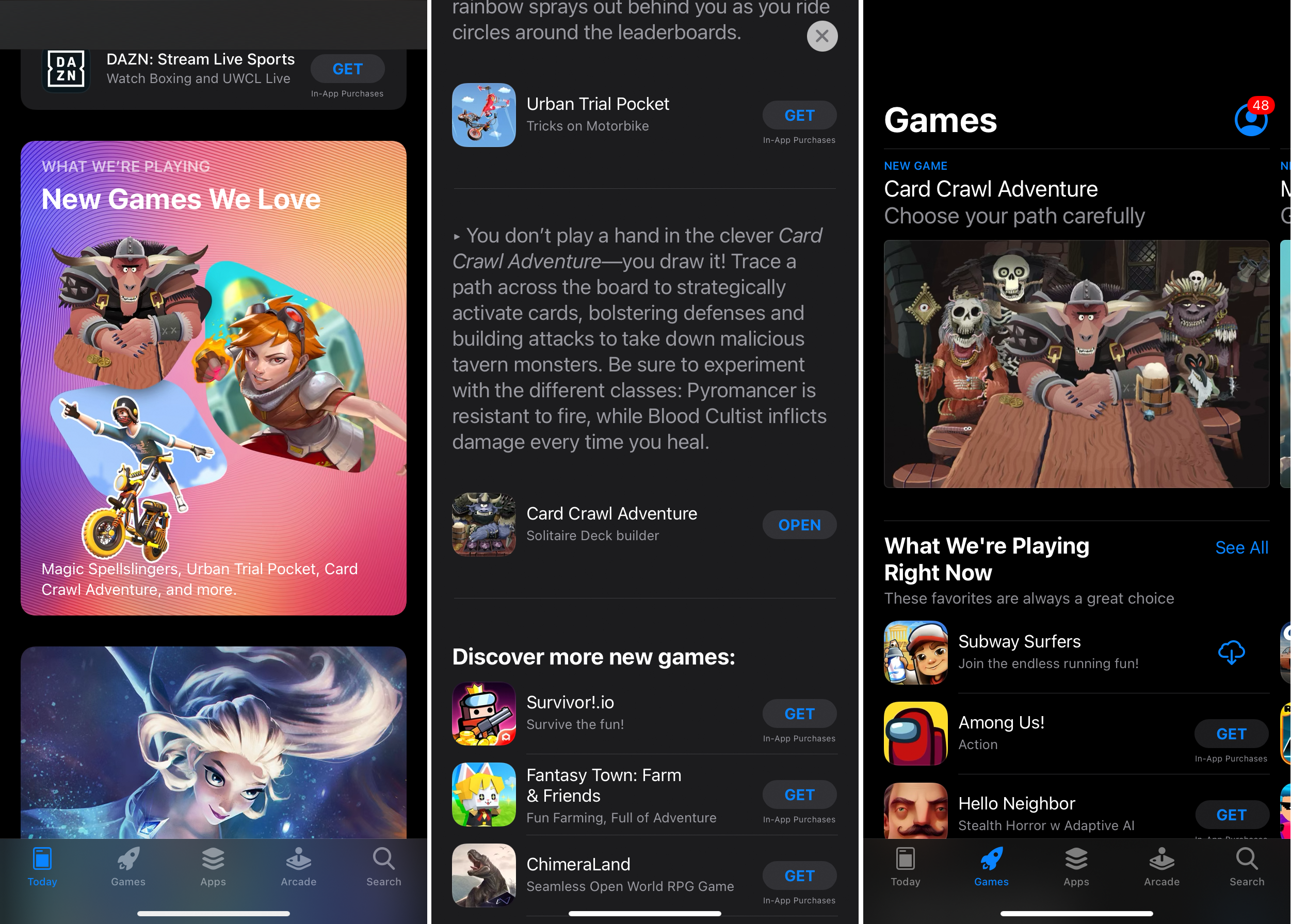 The game is free to download offers 1 free character and 4 payed characters ($0.99 each), which are all free to try as well. We also offer an „easy mode“ for $0.99 and a consumable purchase to catch up on the Weekly Tavern Crawl our weekly game mode that incentivizes players to play a game each day of the week without missing a day.

The game has generated around $2000 in it’s first month, $1300 coming from Apple and about 700 coming from Google. With an average of about $66 a day this revenue amount falls in line with most of my other titles. Again, I was anticipating that we would not get a huge first week revenue spike, since those days on the App Store are pretty much over and I rather have a stable base revenue which we will improve by more content und feature updates.

In comparison here’s the revenue chart of August for my other games, where most notably Card Crawl got a huge bump in sales as well, probably due to people either downloading the „wrong“ Card Crawl or trying it out on purpose after playing Adventure. 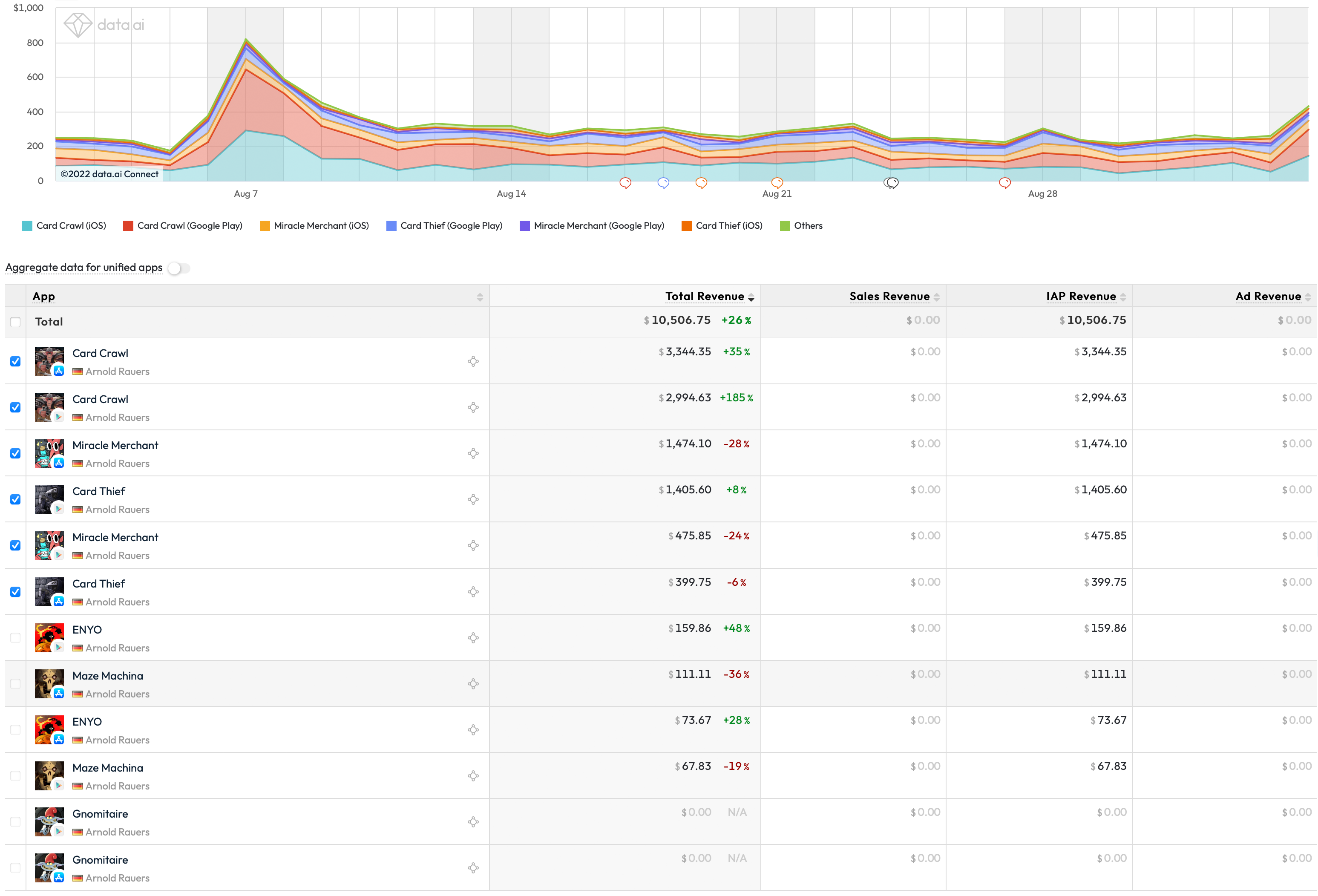 The game got received quite well. We got several games media posts most notably the Game of the Week by Toucharcade. But also a few smaller shout outs by Android Police, Tap Smart, and 148 apps.

We also got some really nice video reviews by MintCity and Cpt Benzie. One of my favorite streamers Esty8Nine did an amazing 3h stream of the game, while completing a full run on his Twitch channel.

The biggest critic of the game is its initial complexity and steep learning curve if you are not a fan of the genre. Once master most people will enjoy the trade off and will appreciate that we need to sacrifice some of my other game’s simplicity in favor of a much deeper and more engaging gameplay. I wrote a small comment on how I see the game:

Again, I think most fans of my games actually ended up really enjoying the game and we will definitely work on improving the onboarding a bit more after we conquer the mountain of smaller issues and bugs that are reported atm.

I personally think that Card Crawl Adventure is my best game yet and it was an amazing experience to work in a design duo early on. I’m super proud of the team and what we managed to create. The game looks and sounds fantastic and many of the smaller issues that we still work on will be solved eventually. I’m also very stoked to work on new content that most of our long term play testers already eagerly await.

If you haven’t yet, please check out the game and leave us a review on any of the stores.

Come join our Discord community to discuss the Weekly Tavern Crawl with us, we’re always looking for new Adventurers!

A short interview with the worlds best Miracle Merchant player